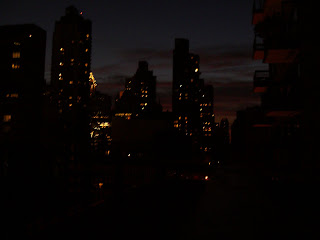 After an autumnal Saturday (cool, showery, max 20C), we had a beautiful summer's day today: sunny, 25C, not humid. we are quite into cycling at the moment. Have cycled >150km this month, and it is an excellent way to explore the city beyond Manhattan; there are more than 1,000 km of bike lanes in NYC, so there is no shortage of places to go! Today we rode over the Williamsburg Bridge, then headed down into Brooklyn proper for pizza lunch then back over the Brooklyn bridge and up the dedicated bike lane on 8th Ave, about 35km in total. 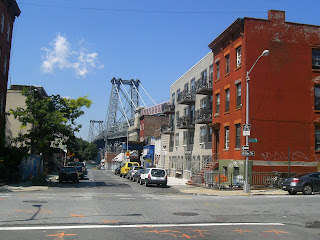 Williamsburg Bridge (from the Brooklyn side) 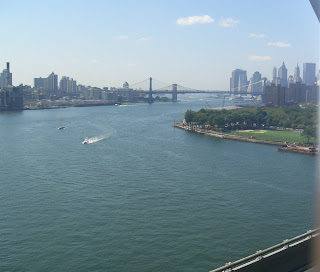 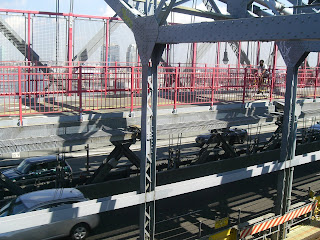 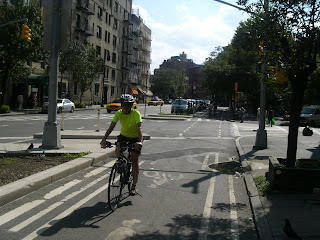 coming back on 8th Ave 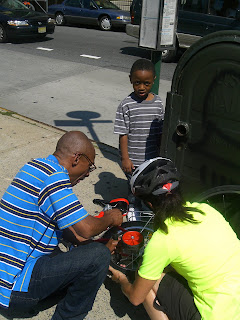 offering some road side assistance in Brooklyn
Posted by monica/paul at 4:48 PM 4 comments:

The first hurricane of the season swept acrsos the Carribean towards Florida but then did a leg break and headed directly up the East Coast and passed by NYC. Huge waves and dangerous "rip currents" were predicted so all the New York beaches were closed. So we schlepped down to Coney Island to check out the conditions.... 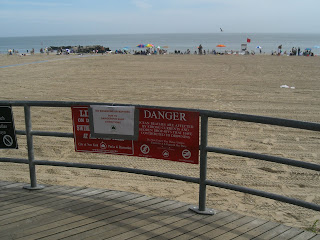 as you can see the surf was very dangerous 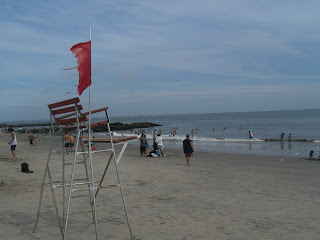 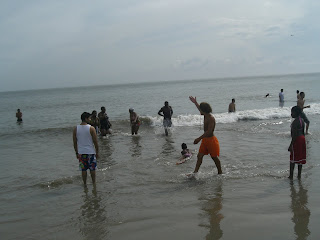 there is so much else at Coney Island if you can't swim.... 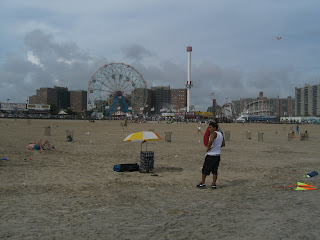 this is our favorite. that's the Freak over on the left in the light blue T shirt, having a smoke between being shot at 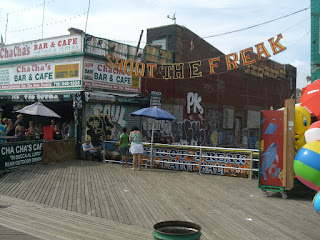 It is officially a "heat wave" here if you have 3 consecutive days above 90F (30C). Today is Day 4. Tonight we have just had a huge tropical thunderstorm, obviously came up from the Caribbean. More than an inch of rain in a few minutes, the rain falling sideways at one point. and lots of lightning. here's some photos; a couple of spectaculr forks which i failed to capture but lots of light. they sure know how to do severe weather here. I can kind of understand the appeal of being a storm chaser. 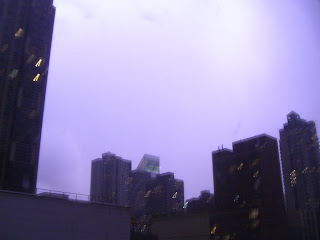 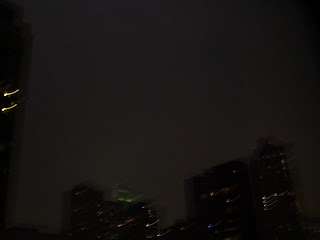 It was on this morning. A loop of central park, then down to Times Square, then the west side bike path to the financial district, near Ground Zero. A fast flat course. we didn't run it; we just did a loop of the park, running against the tide. here's the exact course: 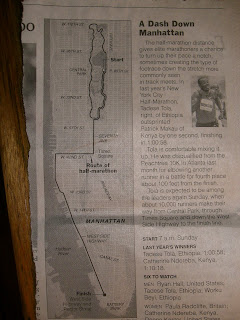 we met some nice New Yorkers who are keen cyclists. This morning they took us on a 60 km bike ride over the George Washington bridge to New Jersey then along the west bank of the Hudson River through the Palisades Parkway. We met at Central Park at 9.30 am and didn't get home till 3pm. and it was 32C today. Here are some pictures: 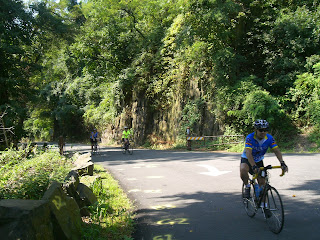 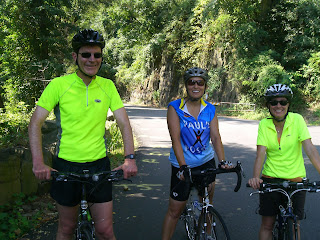 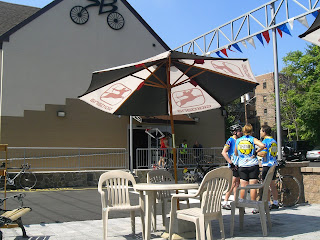 bike shop at the Palisades 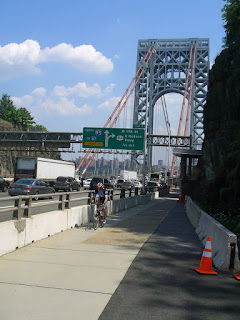 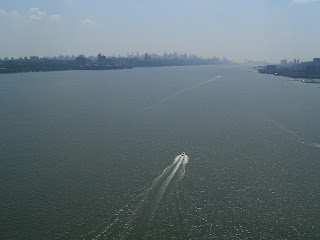 view of the Hudson & west side of Manhattan from GWB
Posted by monica/paul at 10:29 PM No comments:

This week we got the first day in the 90's (30C), and with the humidity it feels closer to 35C. Sunday afternoon we went for a walk down in Chinatown and it was not only hot & humid but very crowded with tourists, noisy and chaotic, as this photo shows. 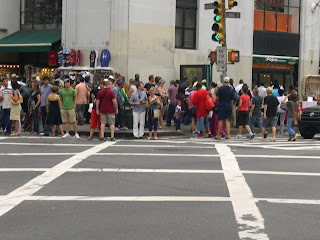 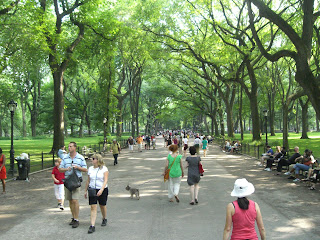 On saturday mornings in August they close off Park Ave from 8 till 1 for joggers and cyclists, all the way down to Brooklyn Bridge. we did it last saturday, then kept going for a 40 km ride through Brooklyn 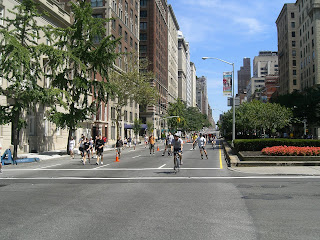 there is a cinema on E 62nd st, whihc we look down onto from our rooftop terrace. Summer movies are second only to the holiday season ones and this was the queue one evening for GI Joe, based on the Transformers character, which is smashing all the all-time box office records (like taking >$50M at the box office in the first week). we saw Julie and Julia instead: great movie about blogging (and also cooking). Not sure why the queue veers off the footpath onto the roadway.I guess people really are like sheep! 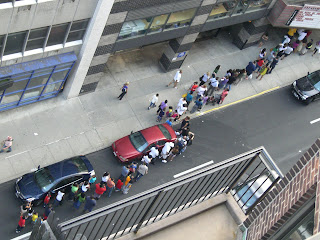 Finally this picture was taken from the High Line on Sunday, overlooking the Hudson River by W.14th st. On the water to the left is a tug-like Coast Guard vessel at the search site looking for the wreckage of the plane and helicopter that crashed on Saturday, killing 5 italian tourists (yes heard about the terrible plane crash in PNG today). Coincidentally, the brown semi-circular arch in the right foreground is the rusted remanants of the Pier 54, where the Titianic was supposed to dock in 1912; if you look closely when you are there you can see the faded paint of the"Cunard-White Star Line" sign (& interesting juxtaposition of a modern cruise ship behind it). 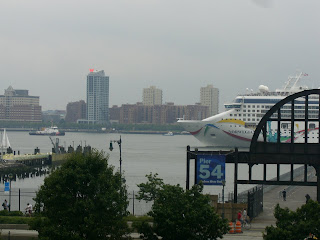 no doubt you also heard about the terrible car accident on the Tacoma Parkway (like the F3) just north of NYC two weeks ago, when a woman drove the wrong way on the freeway for 10 minutes before having a head on killing herself and her 4 children plus 3 adults in the other car. What you may not have heard was the post mortem results...turns out she was pissed and stoned and had drunk 1/2 a bottle of vodka before the 1 pm accident (blood alcohol 0.19)and she had been smoking a joint while she was driving!!!! he husband denies she had a problem but is likely to be in big trouble himself, for allowing her to drive in that state
Posted by monica/paul at 8:52 PM 2 comments: 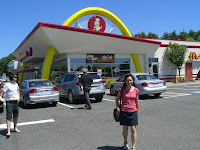 crap weather in the Northeast continues

after the cold wet June, we have had the 8th coldest July on record as well, and 50% more rain than usual (officially 180 mm in Central Park; I measured 158 mm; normal 120 mm). Long range forecast is for coldest, snowiest winter in 5 years. so much for climate change! We have now had >750 mm for the year. some pics from our terrace; it was really pissing down. at least the plants like it... 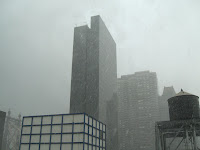 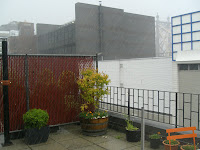