Australia in the headlines

The Labor Party infighting made it into the NY Times ("Australia Premier Survives Challenge From Her Party") but so did this article on koalas, which sadly are an endangered species: "Squeezed Into Smaller Spaces, Koalas Now Face Deadly Disease", by KAREN BARROW, published February 20, 2012 in the Science Times section...

Faced with habitat loss, climate change and bacterial disease, koalas are being pushed into smaller and smaller regions of the country. In Queensland, the vast state in Australia’s northeastern corner, surveys suggest that from 2001 to 2008, their numbers dropped as much as 45 percent in urban areas and 15 percent in bushland.

And while climate change and habitat loss are affecting many other uniquely Australian animals, too — from birds and frogs to marsupials like wombats, wallabies and bandicoots — it is a bacterial infection that is worrying many scientists about the fate of the koala.

“Disease is a somewhat silent killer and has the very real potential to finish koala populations in Queensland,” said Dr. Amber Gillett, a veterinarian at the Australia Zoo Wildlife Hospital in Beerwah, Queensland.

The killer is chlamydia, a class of bacteria far better known for causing venereal disease in humans than for devastating koala populations. Recent surveys in Queensland show that chlamydia has caused symptoms in up to 50 percent of the state’s wild koalas, with probably even more infected but not showing symptoms.

The bacteria — transmitted during birth, through mating and possibly through fighting — come in two different strains, neither the same as the human form. The first, Chlamydia pecorum, is causing a vast majority of health problems in Queensland’s koalas; the second, C. pneumoniae, is less common.

Unlike C. pecorum, the pneumoniae strain can jump to other species, but so far there is no evidence that it has spread from koalas to humans or vice versa.

Chlamydia causes a host of symptoms in koalas, including eye infections, which can lead to blindness, making it difficult for them to find scarce eucalyptus leaves, their primary food source. The bacteria can also lead to respiratory infections, along with cysts that can make female koalas infertile.

The epidemic has been particularly severe in Queensland, where nearly all koalas are infected with koala retrovirus, said Dr. Gillett. This retrovirus is an H.I.V.-like infection that suppresses the koala’s immune system and interferes with its ability to fight off chlamydia.

Treating chlamydia in wild koalas is a challenge, she said. The disease is so devastating that only a small percentage of the animals can be treated successfully and returned to the wild. And infected females often become infertile — a condition that cannot be reversed, so future population growth is affected as well.

There is no treatment available for koala retrovirus, but researchers are working to test a vaccine that would help prevent further spread of chlamydia infection in Queensland’s koalas.

A study published in 2010 in The American Journal of Reproductive Immunology found that this vaccine is both safe and effective in healthy female koalas. Further work is being done to test it in koalas that are already infected.

Peter Timms, a professor of microbiology at the Queensland University of Technology who is leading the effort to test the chlamydia vaccine in koalas, is hopeful that there will be another trial this year to test the vaccine in captive male koalas, followed by wild koalas. If all goes well, plans can be set in motion to distribute the vaccine more widely.

“It’s going to be impossible to vaccinate all wild koalas,” he said.

In Australia, there is no national plan to save the koala; it is up to each region to establish management plans for its koala population. Therefore, once the vaccine is shown to be completely safe and effective, Dr. Timms suggests targeting specific, threatened populations where capturing and releasing koalas would be practical, like those bordered on all sides by housing developments and roads.

Dr. Timms is also working on a single-dose form of the vaccine to make it more feasible to vaccinate wild koalas.

Another possibility would be to make vaccine distribution a routine part of treatment for the thousands of koalas brought into care centers every year after they are injured by cars or dogs, Dr. Timms said.

While it is a combination of problems that are affecting the wild koala population, many experts believe this vaccine would be an important step in helping koalas survive longer. It may buy enough time to give researchers a chance to solve some of the other problems facing Australia’s koalas.

“In situations where you combine habitat pressure, domestic dog attacks and car hits with severe chlamydial disease, the outcome for koalas is devastating,” Dr. Gillett said.
Posted by monica/paul at 6:35 AM No comments:

And what a lovely little boy he is turning out to be! Weighs 8.5 kg, sits up,learning to crawl (pediatrician recommended phsyiotherapy for his "poor posture and weak core muscles"!!??... they reckon crawling is associated with reading and writing ability. Only in New York!!), able to weight bear, sleeping through the night (7pm to 6 am), and only 2 daytime sleeps now, 2 teeth and eating 3 meals a day. But most of all a bright, happy disposition and he loves his Mommy.

Xavi is looking forward to seeing everyone in Australia again next week. 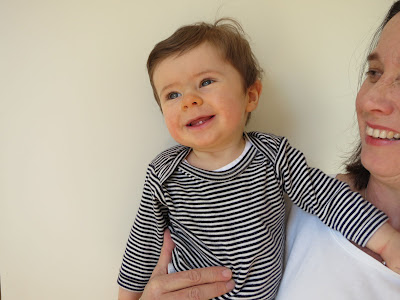 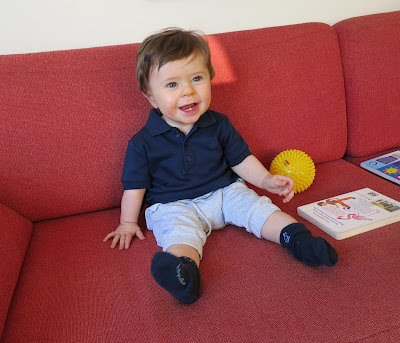 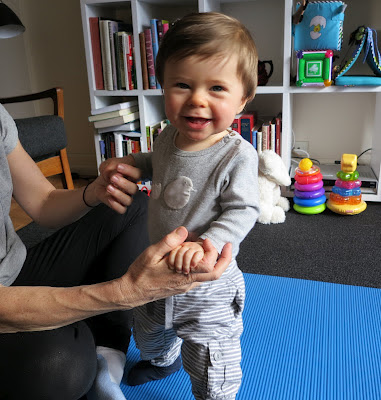 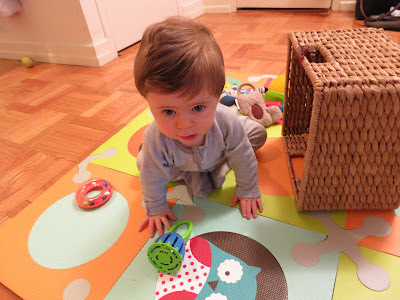 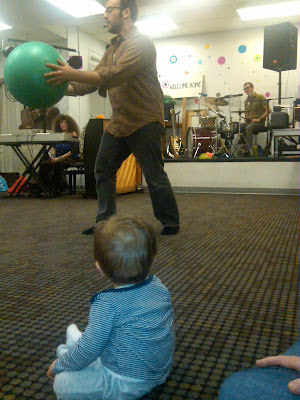 having fun at "Little Maestros" music camp
Posted by monica/paul at 8:43 AM No comments: 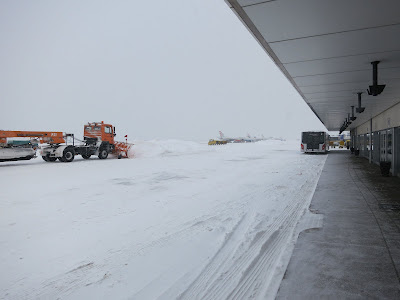 Clearing the runway at the airport. Croatian Airlines was very good 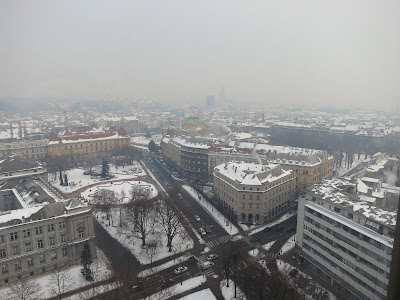 Aerial view of the city from the Westin hotel 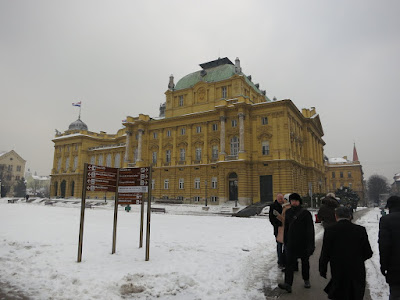 National Theater. Zagreb was part of the Austro-Hungarian empire and is very stately 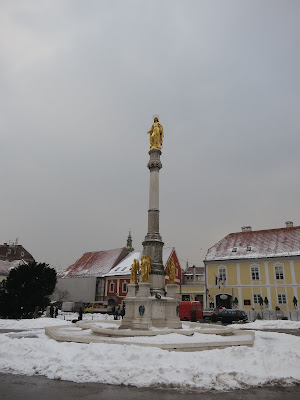 column outside Cathedral of the Assumption of the BVM 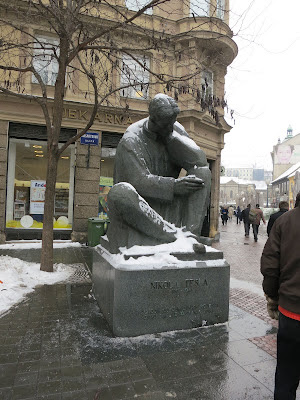 Paul at a conference in Zagreb last week, leaving Monica & Xavi behind in NYC. As you would have heard on the news, it was bitterly cold there; lucky to get up to minus 15 deg. C of a day, and -20 in the wind. 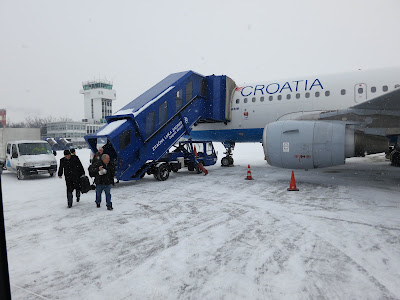 Disembarking in the snow at Zargreb Airport. Also flew out in heavy snow; plane had to be de-iced before taking off. 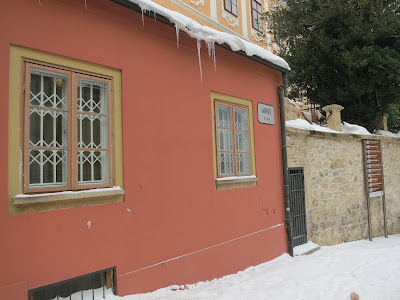 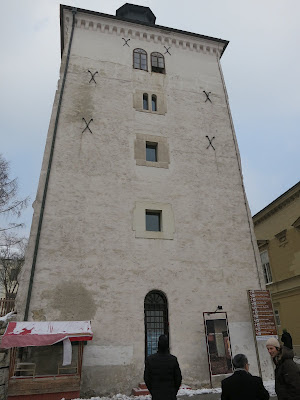 Tower in the Old Town. They fire a cannon from the 5th floor window at noon each day, in memory of keeping out the Turks in the Middle Ages [the cannon ball landed in the Sultan's soup, according ot the legend :) ] 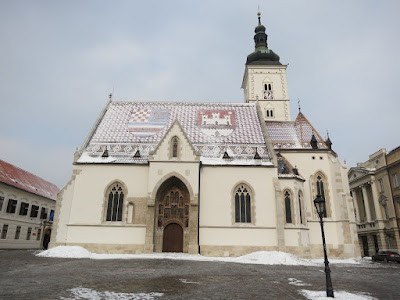 Church in the Old Town, with the Croatia & Zagreb coats-of-arms in the roof tiles. 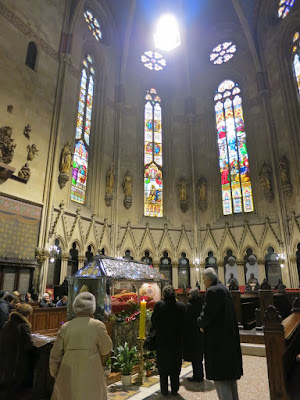 Sarcophagus of saint inside Zagreb Cathedral; he had been a national hero in WWII, beatified by JP2.
Posted by monica/paul at 7:16 PM No comments: