Today was Memorial Day. It officially marks the beginning of summer although this does not occur meteorologically for a few more weeks. But today was certainly summery; a morning thunderstorm (7 mm rain) then a hot humid day, max 32C.

American children learn that Memorial Day is a patriotic holiday celebrated on the last Monday in May. It is a celebration of remembrance for the brave service of men and women who gave their lives for their country. Originally, Memorial Day honored those who had died in the Civil War. Now, it honors those who died in the Spanish-American War, World War I, World War II, the Korean War, Vietnam and Desert Storm.

Memorial Day was declared a federal holiday in 1971. Americans now also designate this day to remember loved ones who have passed on, as well as remembering their service men and women. Flowers and flags are placed on graves in remembrance of them. Parades and dedications of memorials usually are part of the day's activities. Boy Scouts, Girl Scouts, local marching bands, members of the armed service, fire departments, police departments, and fraternal orders often march in parades and attend ceremonies to commemorate the day.

We had lunch in SoHo then walked up to Washington Square, then dinner on our terrace. 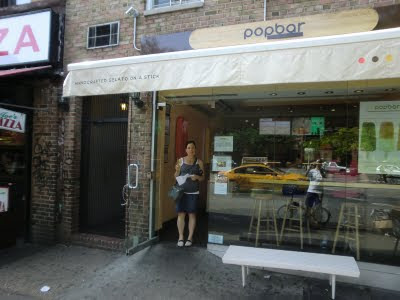 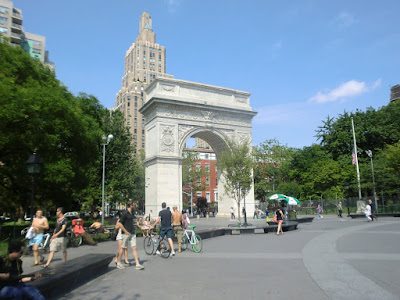 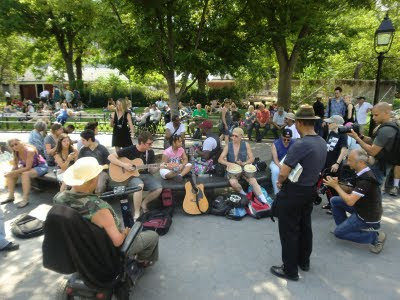 they were playing All Along The Watchtower (after Dylan, not Hendrix) 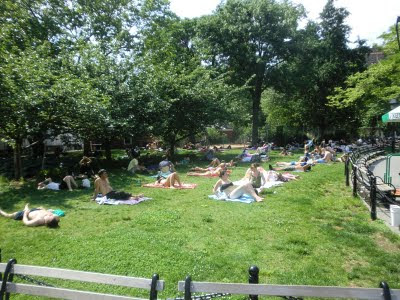 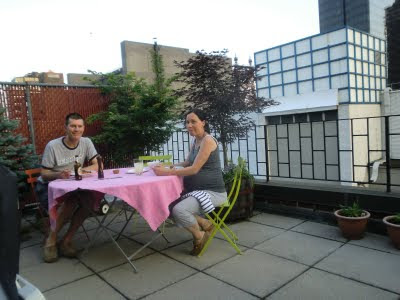 dinner on the terrace
Posted by monica/paul at 8:42 PM No comments:

It is the Memorial Day long weekend, but Monica is not very mobile now, so we didn't go far. We took the train to Philadelphia. It is only Syd-Newc distance away. The name means "city of brotherly love". It is very historical, and was the national capital from the time of Independence in 1776 until 1800. It has lots of old buildings and stately squares dating back to that period. But it also has lots of modern amenities, including the Art Museum (Rocky ran up the steps); a great bike path stretching for miles along the river; modern shops and restaurants. It is definitely worth visiting... 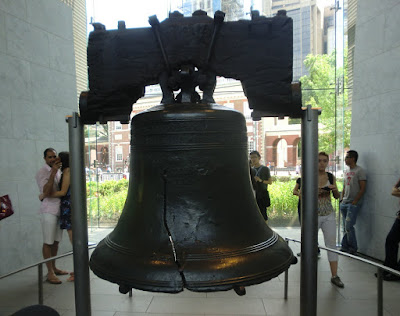 The Liberty Bell (the crack symbolizes the imperfectness of liberty in the USA). 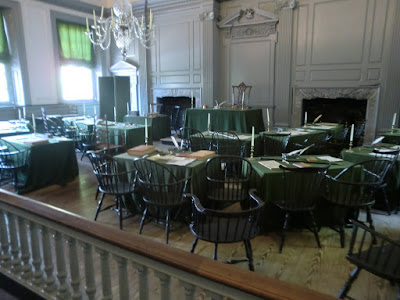 The Assembly Room of Independence Hall. Washington sat in the chair at the back when presiding over the writing of constitution, which Benjamin Franklin et al worked on at the other tables. Lincoln's body lay in state here as well. 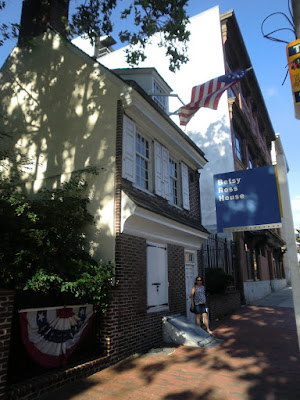 Betsy Ross's house. she was a seamstress and sewed the first Stars & Stripes flag. She must have been about Monica's height judging by the door size :) 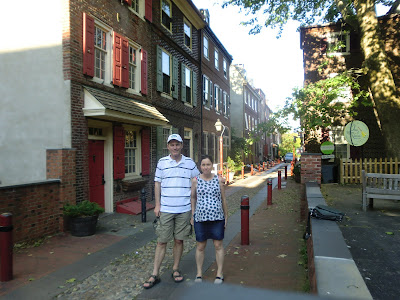 Elfreth's Alley. these "row houses" (terraces) date back to 1711; this is supposedly the oldest continuously-inhabited residential street in the country. 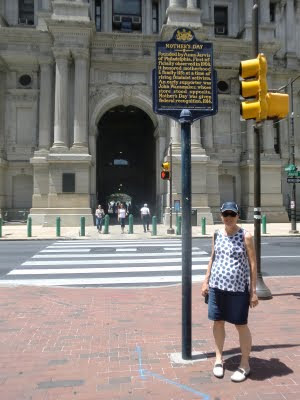 36 1/2 weeks (who's counting). Click on the picture and you can read that the idea of Mother's Day started in Phila. (P.S. Make sure you click on the picture of Obama & DSK on the previous post!)
Posted by monica/paul at 12:09 PM No comments:

it's a tough job being President :)

Posted by monica/paul at 6:13 AM No comments:

All work and no play is the American way.

Americans' lack of paid holiday leave is legendary in Australia. Blog followers may find this article on working life here interesting (from CNNMoney):

Not only do American workers get less vacation time than workers in other industrialized countries, but they also opt to take fewer days off.

The average employed American worker got 18 vacation days last year, but only used 14of those desirable days off, according to a 2010 survey by Expedia.com.

Alternatively, workers in France got 37 vacation days last year and used 35 of them while the average worker in Great Britain received 28 vacation days and took 25, Expedia said.

Meanwhile, those four forfeited days of vacation per person add up quickly. Altogether, Americans gave up 448 million earned but unused vacation days in 2010. Considering the average wage of $39,208 for a full-time worker -- that's $67.5 billion worth of time.

"Vacations tend to suck up money. They tempt people to spend more, save less and take on more debt. By forfeiting some of their vacation days, Americans are trying to eliminate the temptation to spend money," Spiker said.

Only 38% of Americans said that they take all of their vacation days, according to the Expedia survey, with most only using a small portion of the coveted benefit.

Some workers say their bosses are not very supportive of them using their vacation time, others simply can't swing it.

That's the case for Mike O'Neill, an energy policy analyst with mid-sized law firm in Washington, D.C. Part of O'Neill's responsibilities include writing a daily blog for the firm. "I'm the only person who does this so I do try to avoid being out of the office," he said.

On the heels of the Great Recession, unemployment remains high. "Headcount is so low, salaried employees are probably doing a job-and-a-half minimum, maybe two jobs, and they can't get away," noted Mickey Kampsen, president of MRINetwork's Management Recruiters of Charlottesville.

"They are trying to bring as much value as possible to their company in order to keep their job," she said. "You've got to show you are one of the loyal soldiers."

And even when Americans do take time off, a whopping 72% of workers said they check in with the office at least occasionally -- if not every day, according to a recent poll from Rasmussen Reports.
Posted by monica/paul at 6:56 AM No comments:

Not the end of the world, but a very wet week

Judgment Day/The Rapture came and went without incident, but it was a very wet week. There was a extensive storm system sitting over the Atlantic. It was wet from Boston to Washington DC, and inland as far Pittsburgh. Our third May here, and they have all been wet; not a good time to visit. In NYC this week, it rained on 7 out of the last 8 days (a record for us), heavy at times and over 110 mm in total, including 5 days straight with 98 mm (nearly 4 inches) in total (another record). 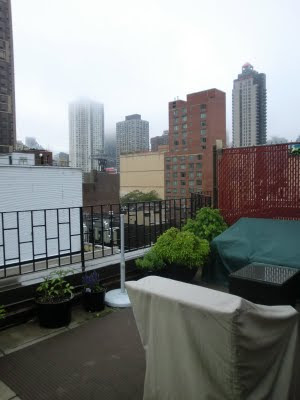 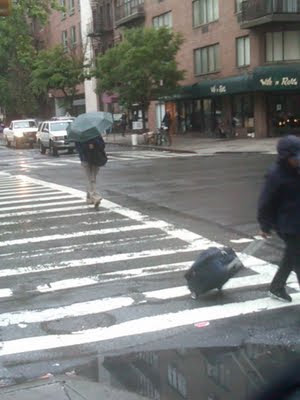 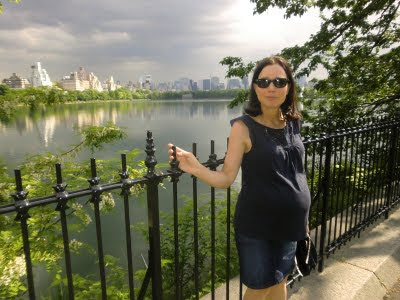 At the northern end of the Reservoir in Central Park (the reservoir is named for Jacqueline Onassis Kennedy for a bit of Kennedys trivia)
Posted by monica/paul at 8:15 PM No comments: 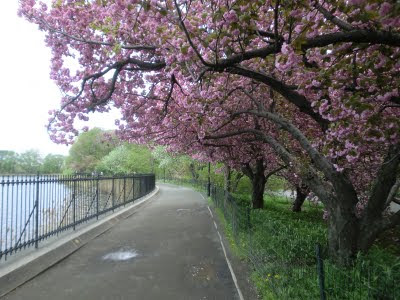 Posted by monica/paul at 7:36 PM No comments: 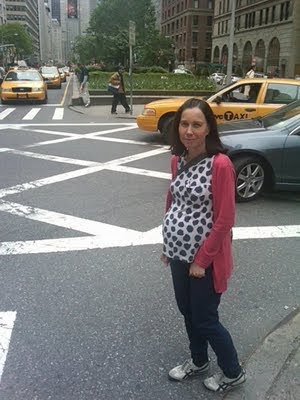 Park Avenue on Saturday afternoon
Posted by monica/paul at 6:55 PM No comments: 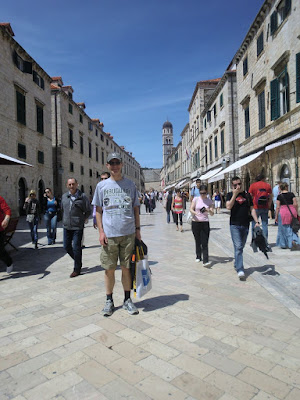 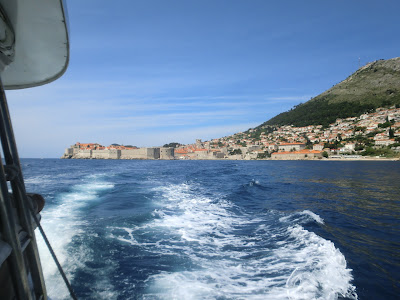 heading out of the Old Port 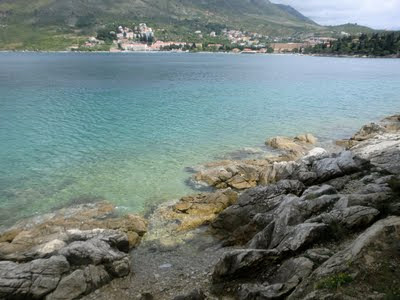 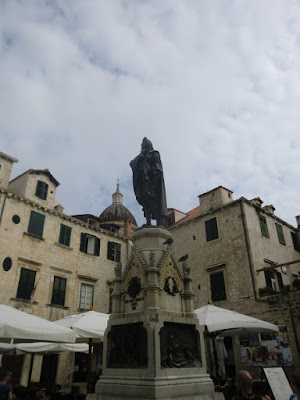 square in the old town, just like Piazza Navona 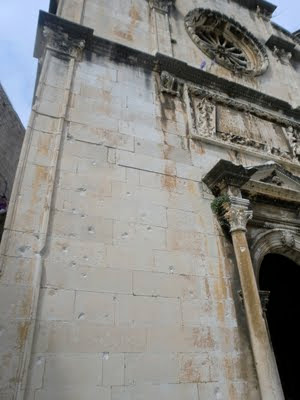 shrapnel scars from the 1992 war. Dubrovnik was occupied by Montenegro
Posted by monica/paul at 6:54 PM No comments: