All the focus is on Times Square of course with the ball drop at midnight being the "last" place on the planet to welcome in 2012, almost 24 hrs after the Sydney fireworks. We may be just 2km from Times Square over here on First Avenue, but it is a world away: just another bleak winter's Saturday morning, though a bit quiter than usual because of the holiday weekend. It is unseasonably mild today, 12 degrees Celsius being more like April than December, so good to make the most of it and get outdoors as it is not expected to get above freezing for most of next week. 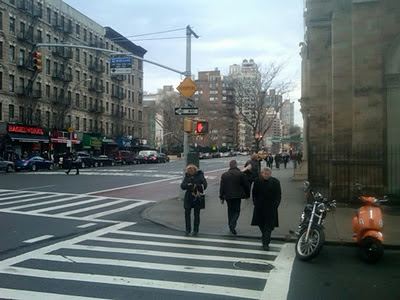 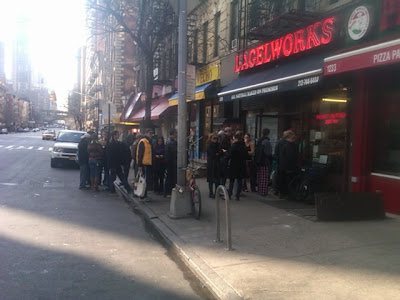 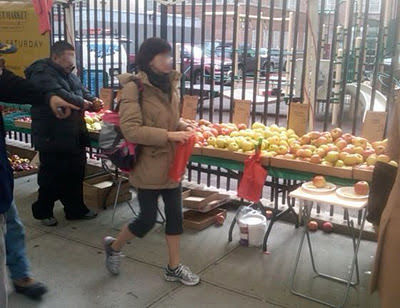 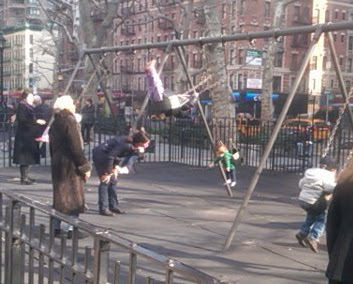 the swings are in big demand at 68th Street playground 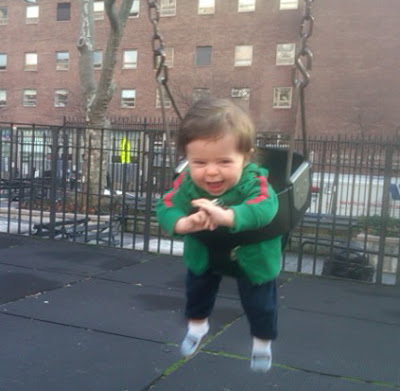 Xavi loves the swing.
Posted by monica/paul at 2:06 PM No comments: 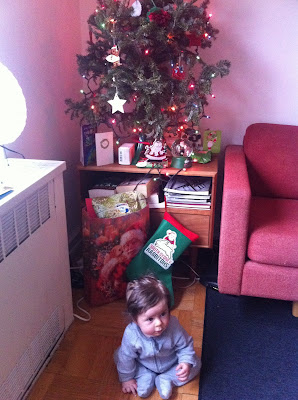 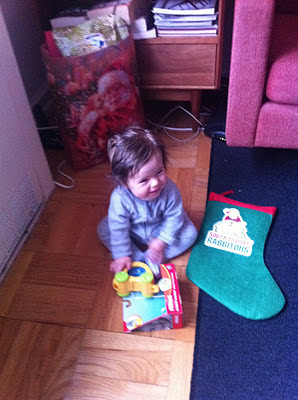 Xavi's first car. Looks like he's going to be a real petrol head! 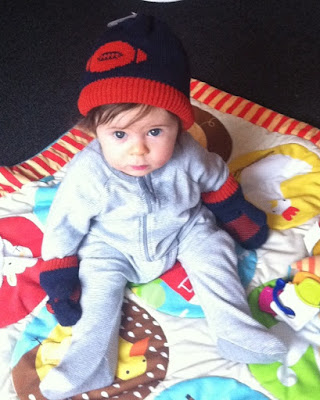 In those colours, looks he's also going to be a Chicago Bears supporter 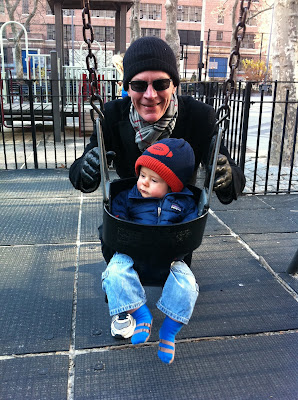 no snow but pretty bleak outdoors today: +2 to +8 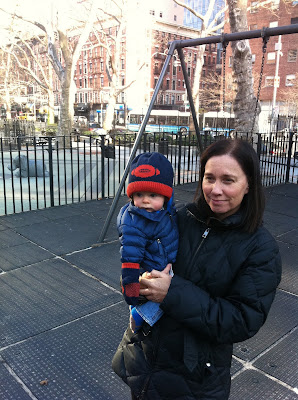 Posted by monica/paul at 8:09 PM No comments:

How time flies! It has been a wonderful journey so far - hope it has been as much fun for him as it has for us.

This week, Xavi started sitting up and has also started lifting his bottom up when he does 'tummy time', so he is getting ready to crawl. He babbles a lot and has started blowing bubbles. He eats some solids (pumpkin soup, weetbix, prunes yogurt). He goes to sleep easily but he is still waking 2-3 times per night. So after he gets over his 6 month vaccinations tomorrow, we will ferberize him.

To celebrate Xavi's "mezzo compleanno", we went to Untitled, the baby-friendly restaurant in the Whitney Art Museum on Madison at 76th, about a 20 minute walk. It was fine and sunny but very cold, only minus 3 deg C, and minus 9 deg C in the wind. No sign of any snow and it is forecast to be 5-10 deg C most days right through to Christmas, so no White Christmas in NYC again this year ( officially defined as 2.5cm of snow on the ground, which happens only 1 year in 7).

Here are some photos of him today 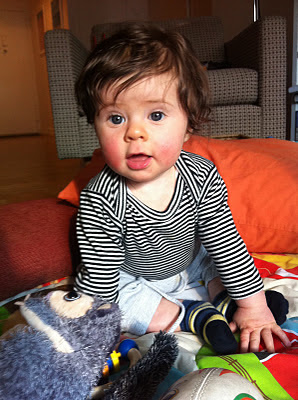 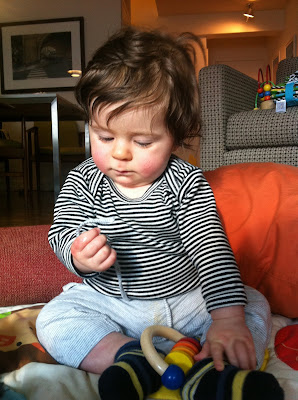 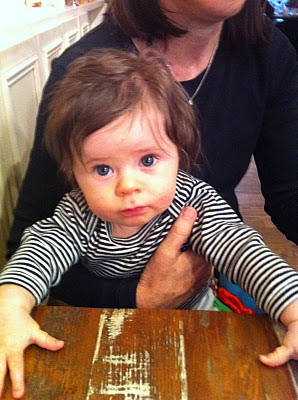 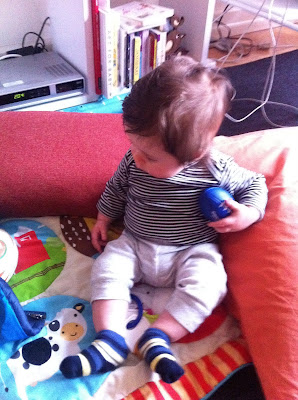 Posted by monica/paul at 1:08 PM No comments:

It rained the whole of the last week we were in Sydney, and by all accounts the big wet there has basically continued ever since (noticed there has not been a good track in Sydney since the Rosehill meeting on December 3rd) . So here is the NY Times waxing lyrical about November rain in these parts, in their occasional "The Rural Life" editorial series, published the day we returned from Down Under. I imagine Verlyn is some old codger with a white beard wearing a flannelette shirt and dungarees while riding his John Deere tractor somewhere not far from Millerton. Hope you enjoy it!

“It’s raining,” I think, and then wonder what the “it” is that is doing the raining. Ordinarily, that’s just a linguistic question. But on a cold November day, it feels like a philosophical problem. It makes no sense to say the clouds are raining when the sky is so solidly, grayly felted. In the pasture, the horses stand, hair slicked, hind legs cocked. I conclude that what is raining is the rain, a phrase that sounds like the opening of a grim, Anglo-Saxon lyric.

The trees are coming into their winter bareness, the only green is the lichen on their branches. Against the hemlocks, the rain is falling in dim, straight lines. The sugar maples on the far edge of the pasture have nothing to say about the rain, only the wind. This is the time of year when all the houses have come out of the woods, edging closer to the roads as if for company.

It will sound strange to say that on a day like this my thoughts are never far from the chickens, but it’s true. The red heat lamps are on in the brooder house, and when chore time comes I’ll look in through the window and watch the month-old chicks for a while before disturbing them with food and fresh water. One by one, they stand and stretch a wing and leg — the only balletic move a chicken can make — then settle back into the mass of bodies. They’re always seeking thermal equilibrium, clustering tighter and edging closer to the heat as the temperature drops, dispersing and drifting away as it rises.

I do the same inside my house, sitting close to the wood stove, writing. The fire burns clean and hot, but this is the kind of day when there is sometimes a backdraft, a tuft of smoke venting out the air intake and into the kitchen with an audible puff. It rises and vanishes but leaves behind the scent of oak and maple burning, a scent so welcome and autumnal that it’s almost bacon to the nose. The rain rains, I write, the chickens brood, and the horses stand in the mist of their breath, all of us getting along as best we can.
Posted by monica/paul at 7:59 PM No comments:

Winter doesn't arrive until the solstice in another 10 days, and no snow yet (apart from the freak storm in October), but it has certainly gotten cold enough this week. Only -2 deg C at 7 am this morning when we went running - fortunately no wind chill - and had only gotten up to 4 deg C by mid afternoon. Sunset is at about 4.30 pm these days and its already getting darker by 3pm.

Xavi does looks cute "bundled up" in his hat and coat when we venture out into the cold. he's 6 months next weekend, and is sitting up (with supervision), eating some solids and looking very grown up in his high chair, reaching out for everything, grabbing things in his two hands - and trying to put it in his mouth.

Yesterday we went Christmas tree shopping at one of the sidewalk stalls that pop up on every other corner across the city this time of year. $50 for one of those little trees on a red & green stand on the sidewalk behind Monica. To get the tree to open up and bring the color and aroma out, we were advised to use warm water with an aspirin dissolved in it the first time we water it!

Photos courtesy of Monica's iPhone. our camera broke and we will buy a new one at the post-Xmas sales. 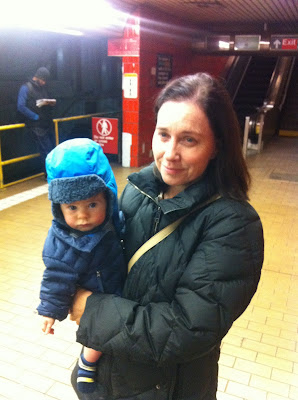 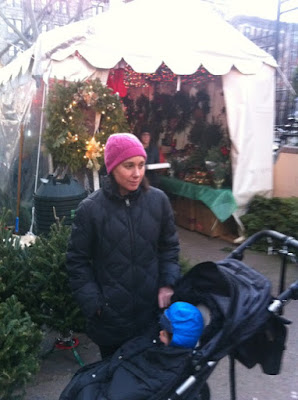 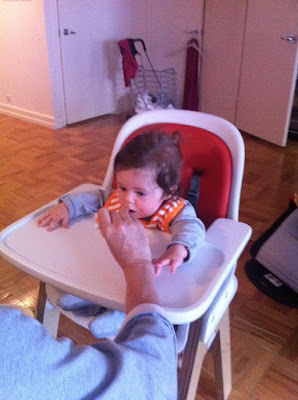 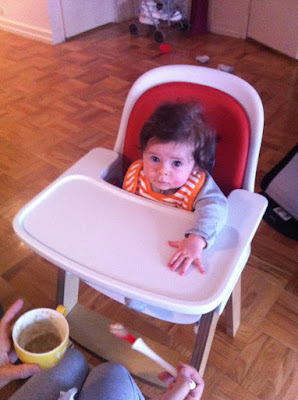 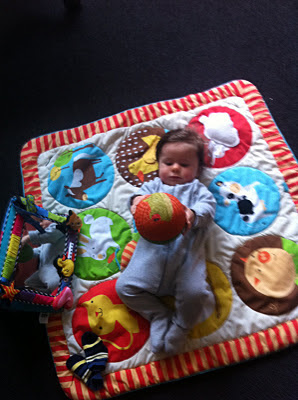 Posted by monica/paul at 7:05 PM No comments:

Xavi had busy social calendar while in Sydney, meeting his extended family who love him so much. Apologies to those who met him and didn't get their picture taken (...and apologies to passengers on QF 107 back to New York) 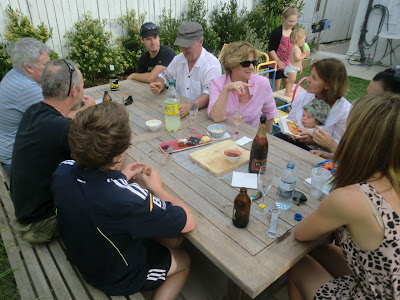 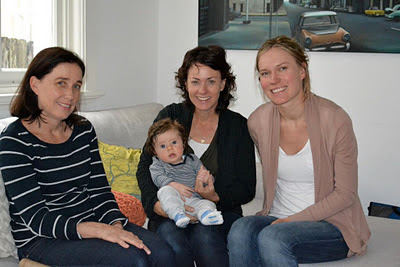 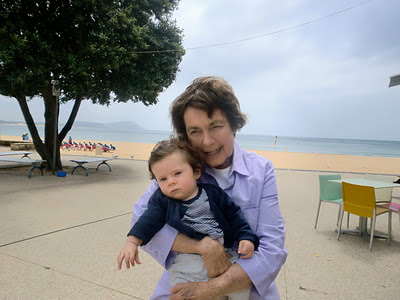 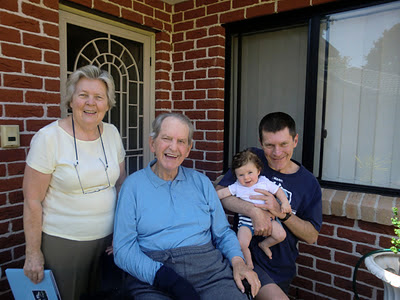 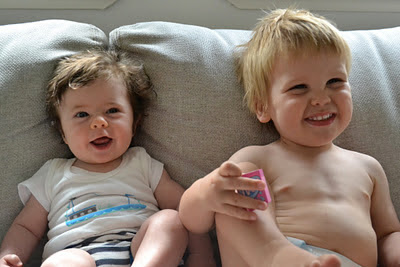 Posted by monica/paul at 9:51 PM No comments: