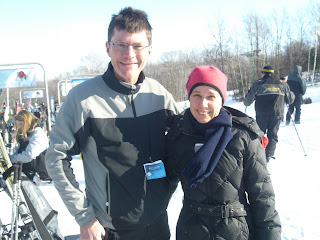 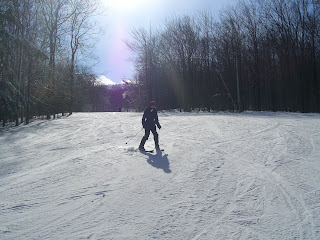 We are going skiing at Belleayre in the Catskills this weekend, before Kate arrives. These are from last month
Posted by monica/paul at 6:36 AM 1 comment: 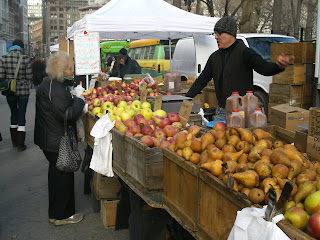 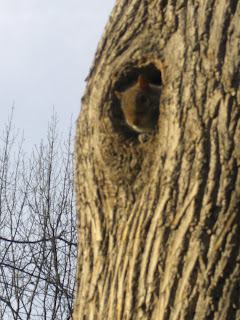 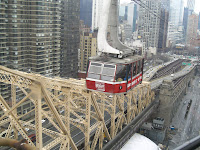 Tram over to Roosevelt Island, beside the Queensboro Bridge
Posted by monica/paul at 7:20 AM No comments: 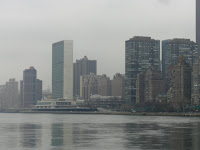 United Nations Building, from Roosevelt Island
Posted by monica/paul at 7:13 AM No comments: 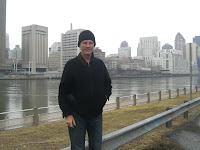 TODAY: UPPER EAST SIDE, FROM ROOSEVELT ISLAND. Our apartment block and Memorial Hospital are visible but too hard to explain where.
We had a pretty quiet week. the weather was mostly "seasonable", meaning getting up to about 5 deg C max, but feeling much colder (subzero) when windy. it was supposed to snow a bit today but it got up to 6 so was just light rain, a grey depressing day - unlike last sunday. A work colleague gave us a complementary pass for a local health club and we went yesterday and will join. we did an introductory yoga class yesterday afternoon, which was hard work but obviously very good for the posture and balance. We had a late night last night at the Kissane's having dinner with them and another Australian couple from Memorial, been here 12 years, and a old colleague from RPA who is doing a sabbatical at Cornell University, across the road. Today we caught the tram over to Roosevelt Island. it is purely residential and boring but gives great views of Manahattan. The main bizarre news item this week was the woman getting severely mauled by a chimp at her friend's house in nearby Conneticut.
we are getting very excited about all our visitors over the next few months, beginning with katie next sunday. till then...
Posted by monica/paul at 7:24 PM 1 comment: 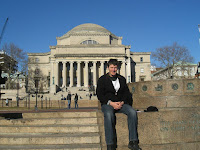 The Low Library, Columbia University, last Sunday.
Historical note: Columbia uni was established by the British in the colony of NY in 1745, and was originally known as King's College. It changed its name after the Revolution in 1788 and is run by the state of NY
Posted by monica/paul at 10:04 AM No comments:

Pic of the day 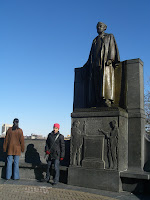 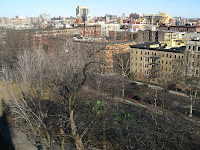 Up the road from the cathedral on the way to Columbia U.: Morningside Park and statue of Carl Schurz (we have a Carl Schurz Park near us)
Posted by monica/paul at 7:14 PM No comments:

while i'm at it, this afternoon i like Real saga in the blue diamond and King's First in the Parramatta Cup!
Posted by monica/paul at 7:00 PM No comments: 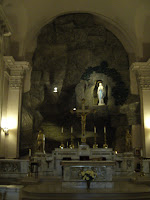 Grotto inside Notre Dame RC Church, up the road from the cathedral
Posted by monica/paul at 7:04 AM No comments: 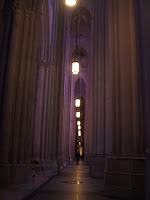 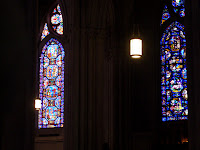 Inside the cathedral
Posted by monica/paul at 7:13 AM No comments:

picture of the day 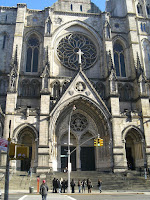 St John the Divine episcopal cathedral. down the street from the seinfield restaurant. according to the guide book, the largest cathedral in the world
Posted by monica/paul at 7:19 AM No comments: 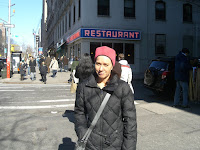 the restaurant made famous by Seinfeld (taken yesterday)
Posted by monica/paul at 7:12 AM No comments: 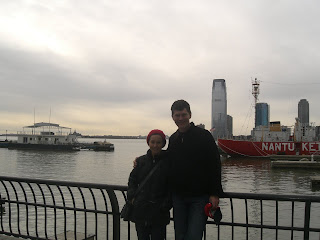 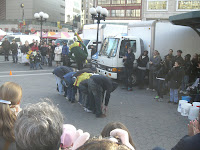 yesterday, we went for a walk Downtown (Tribeca to North Cove) and on the way back stopped of at Union Square to get a gourmet hot dog at "Dogmatic" on E. 17th. This photo was a street performer at Union Square doing a "Evil Kneivel" and jumping over six people, as well as doing a flip in the air (click on it to enlarge). By the way, he made it.

We had a nice sunday, went for a run about 8kms on what they call the bridle path, never see any horses but it is a dirt track through Central Park, it is nice and softer than the bitumen. then brekky at home and a long read of the NY Times. Then we went for a long walk on the upper west side around Columbia University. 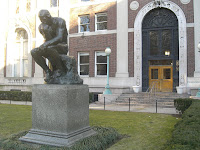 The Thinker, by Rodin, outside the Columbia Dept of Philosophy.

Never been up there before. the uni was amazing, the grounds and the buildings are beautiful, very old looking and oozing with scholarly charm and academia. Then home around 5pm and I sat down and finished my coffee story and finally hit the SEND button to the editor of the SMH. After all this time of rewriting, editing by carmel, stephen and paul changing a word here and there, thank goodness it's off.Paul is appalled by my lack of understanding of basic grammar, use of commas in particular (apparently I use them much too frequently and incorrectly) along with spelling and sentence structure. I dunno, I thought I done pretty good (ha ha )

The weather was most "seasonal" this week, ranging from -1 or -2 in the morning getting up to 4 or 6 by the afternoon. the snow has all evaporated. more is forecast for later this week

The main news items here were the passing of Obama's stimulus package, the tragic plane crash in Buffalo (so soon after the "miracle on the Hudson") and the revelation that Alex Rodriguez, [ the NY Yankees (baseball) star who is being paid $275M on a 10 yr contract] took steroids in 2001-2003. His nickname is A-Rod, so now he is being called A-Roid or A-Fraud. He goes out with Madonna. Saw the catch by Adam Voges on the internet: incredible!
Posted by monica/paul at 7:19 AM 3 comments: 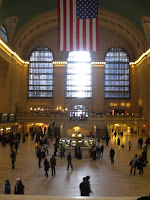 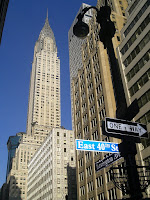 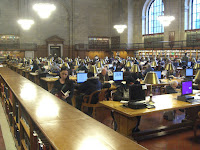 the main reading room of the NY Public Library 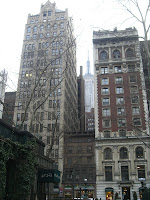 The Empire State Building looming between these bulidings near Bryant Park (good view of Empire State Bldg in the Union Square photo yesterday)
Posted by monica/paul at 8:47 PM No comments: 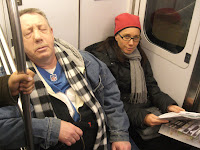 Monica: Yesterday we caught the subway down to Midtown to see the Empire State Bldg etc. This has been one of the coldest NY winters on record, making running very difficult. As you can see Paul has really stacked on the weight. He'll have to start exercising again soon and cut down on  the beer and pizzas.
Posted by monica/paul at 8:29 PM 2 comments: 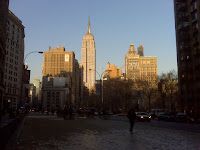 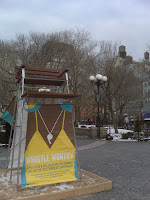 Monica: Union Square, downtown on 14th St has a good farmer's market most days of the week and they only sell local produce from New York State. It's interesting that in this cold climate the only things for sale at this time of year are apples, pears, onions and a few root veges [these have all but finished], eggs, bread and cheese. If you are to eat local it's pretty limited by todays standards. it would have been hard one hundred years ago getting through a winter eating only these foods [plus what was preserved in the summer I guess]. At one of the bakers they had an obituary from the NY Times that is a tribute to a Tasmanian man Alan Scott who died on Australia Day and is credited with reviving the ancient craft of building brick ovens.
The top photo is the view up town from Madison Sq Park a few blocks north of Union Square and the lower photo is of a life guard's chair at Union Sq, as a recruitment promotion for summer. It looked very odd with all the snow still on the ground.
Posted by monica/paul at 6:49 PM No comments:

The Superbowl, according to a Bunnies supporter 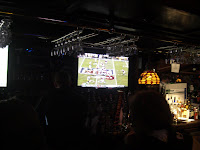 Paul: Yesterday was Superbowl Sunday. It is a big day for parties and one of the few days Americans condone beer drinking.  Every pub has a Superbowl party and i watched some of it (the game is played in "15 min" quarters but with all the stoppages, a qtr takes an hour. i watched the 3rd quarter) at one of the locals, "O'Flanagans", a few blocks up 1st ave. It was between Pittsburgh Steelers who had already won the most Superbowls (5 times), and Arizona Cardinals who hadn't won any thing for 61 years. Being an old Cleveland Browns fan - the Steelers are their hated local derby rivals - for me it was kind  of like watching Roosters vs. Norths, so of course i was going for Cardinals (aka North Sydney). Steelers went in as slight favourites, but at half time they led  17-7.  so i went to the pub to cheer on the Cards for what i thought would be the all-important 3rd qtr, but during the whole hour of the 3rd qtr only one field goal was scored, by the Steelers. As Mondays are my busy day, I left at 3 qtr time (10 pm) pretty bored, with Steelers leading 20-7 and the Cardinals being outplayed. So i missed all the action in the final qtr (seems cricket isn't the only "funny" game). Cards scored 2 touch downs plus a penalty goal early in the 4th qtr, and still led 23-20 with only 3 mins to go but then Steelers got control of the ball and pulled off a miraculous play to score a TD with only 35 seconds left on the clock.  Though i didn't see it, as soon as I heard what happened, it took me back to many a heartbreaking Sunday afternoon at the SFS or Telstra!  (for the smart alecks: i know, souths haven't even been in the grand final recently. but its only been 38 years, not 61!). there was even controversy afterwards about a video ref error that could have denied Cards one last shot even in the dying seconds.
Posted by monica/paul at 7:47 PM No comments: