another day on the NYC subway 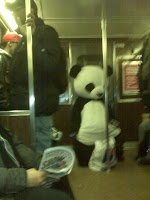 Monica: I went down to Union Square today to go to the farmers markets and get some fresh air. I took this photo using my Blackberry on the subway on the way home and couldn't help but smile. The panda just sat there quietly minding his own business and got up and walked off the train  at Times Square as though it was the most ordinary thing in the world!
Ps I did ask him if I could take his photo but he didn't answer. I guess pandas can't talk.
Posted by monica/paul at 6:40 PM 1 comment:

Meanwhile on the other side of the Pacific... 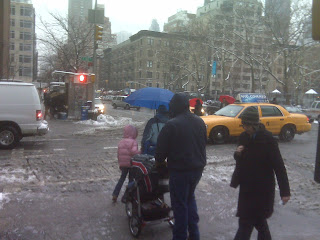 While people were stuggling to work in the snow and rain and slush at Memorial Sloan Kettering this morning, it was a different story a few hours earlier on the other side of the Pacific 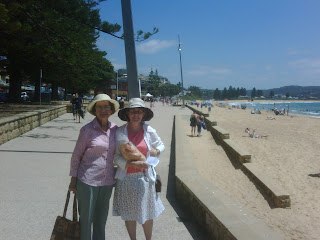 ...the miracle of Blackberry cameras 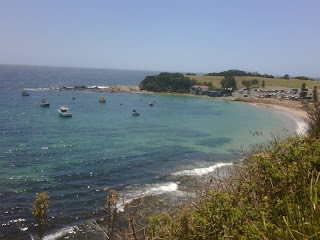 is that Haven or Heaven?
Posted by monica/paul at 7:16 PM No comments:

Now that the blogger novelty has worn off , we will aim to provide a weekly online diary entry.
Saturday, we started the day off running with NY Flyers. They meet at the same spot (near the boat house in Central Park) at 9 am saturday mornings. Did a 10 km loop though the park. Only about 8 runners showed up in the cold [3C, -1 C in the wind] and the pace was very slow. Did learn that to get automatic entry to NY Marathon, need to join NY Raod Runners Club, finish 9 NYRRC qualify races, voulnteer at 1 NYRRC and then pay the standrd entry fee. So we'll join NYRRC this week, and November 2009 beckons.
We set out after lunch to do various things and didn't return until bedtime. First off, we went to the Bowery to the new Think coffee bar, for Monica's coffee story. 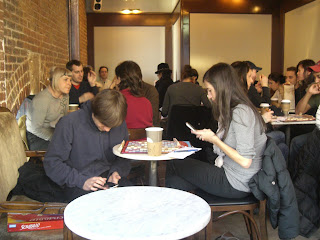 WHO'S GO IS IT?
As this shows, these coffee bars are aimed at uni students who buy one coffee and sit there all day playing scrabble, but there are attention spans are so short they have to check their phones and Blackberries between goes!
The day got progressively colder as it went on, an d it was very cold by the afternoon. From Think, we walked in real sub zero temps to the subway at Washington Sq., then headed up to Chelsea to w.25th st, way over between 10th & 11th Ave into the teeth of an arctic blast, to see an art gallery with some mediocre aboriginal art. Next stop was the Australian Hotel on w.38th st at 5th Ave and it was too far and too cold to walk back to the subway so we caught a cab. The pub wouldn't be on most tourist itineraries but it is good to know there is one place in NYC you can get a Tooheys New and watch replays of the cricket or footy. 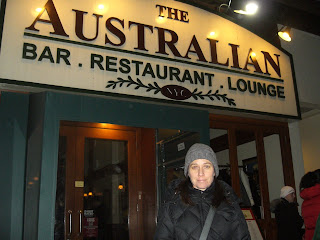 After the pub, we went to Gramercy Tavern to eat, but it was a 90 minute wait for a table, so they recommended the Irving Mill restaurnant nearby, but ufortunately Monica got crook from the chicken roulade so we had a very quiet Sunday.

It was too cold to run Sunday morning, but we did walk over to Central Park in the afternoon and on the way stopped at the old NY 7th Regiment Armory which takes up the whole block between Park & Lexington at 67th & 68th. it was built in the 1880's during the so-called Guilded Age and was the "military, social & cultural home of the regiment". it fell into disrepair but is now being renovated.
Tomorow morning CBS Morning Show is doing an Austrlaia day special. it will be shown on Channel 10, presumably on tuesday. There was an invite emailed to NY Aussies to go to the studios, near the Apple Store on 5th Ave but i have a outpatient clinic and Monica will still be too sick. By the way, we bought $40 raffle tickets for 2 return business class tickets to Syd, drawn at the Gala Ball on firday night. based on monica's luck i thought we were a chance, but haven;t heard from them so probably missed out.
Lat thing on Australia Day, they have been having a "A Taste of Australia" promotion at Food Emporium, our local supermarket chain. it is wierd seeing the advertisments for Australian products, but no Vegemite or Weetbix, but wierd stuff like licorice and water enhanced with flower essence! 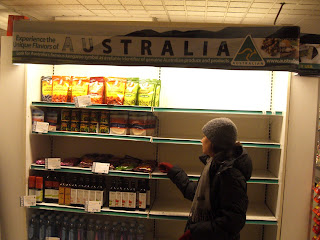 Last night, we went see to Dr Simon, a GP in the expensive part of the Upper East Side who moonlights as an Immigration Dept-authorized "civil surgeon" for our medical examination, as part of our Green card application. This is not because they are concerned about our own well being, but to check that we don't have AIDS, TB, Hep B, scabies, syphilis, yaws or any other communicable diseases. Curious, because we didn't have a medical before we arrived in July so have already been here six months infecting US citizens.  so we filled out some forms, paid $US350 cash and gave some blood. Monica also had to have a Mantoux test for TB and Paul a tetanus shot.
Once we get the all clear on the medical, we have to submit photocopies of our current and past passports to prove we haven't been to Iran or North Korea, our birth certificates and marriage certificate an all sorts of other personal information as well as 12 references from Paul's colleagues saying he will be worthy addition to medical ranks of in the US.
There are 2 options for us getting a green card, "consular" or "adjustment of status". we have elected the latter as it is all done within the US. With "adjustment of status", when our application gets lodged there is a 3-4 month processing period, during which time our visa is suspended  and if we leave the US we can't come back. Once it is processed, we have a brief interview at the Immigration office in NY and are then put on a waiting list for allocation, which could take 12 months or longer. During this waiting period you can come and go, but the term the Immigration Dept uses is 'on parole', no kidding. if you go "consular", you stay on your visa till you get the green card but it requires returning to Sydney at very short notice (2 weeks) for a green card interview that is not a foregone conclusion.   Our visas are for 2 years and renewable at least once so why bother but Paul needs a green card for his work (to apply for research grants etc). it also makes entering and leaving the US much easier.   Lucky Guantamo Bay is now closed!
Posted by monica/paul at 7:42 PM 5 comments: 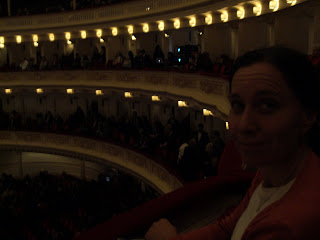 Our seat in an opera box on the second tier at Carnegie Hall (OK, will use a higher ISO next time) 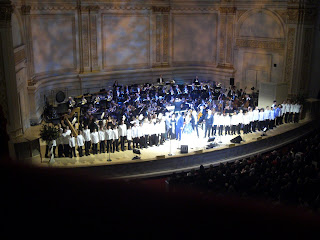 The end of the show, with the Qantas Choir and all the cast on stage 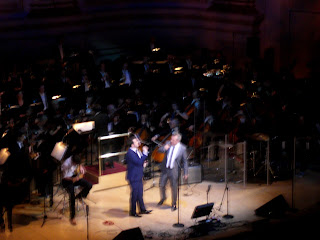 Jimmy Barnes and David Campbell and the Adelaide Symphony orchestra

Last night, went to the 'Australia Plays Broadway' show, part of the G'day USA: Australia Week, in Carnegie Hall. It is an absolutely magnificent old theatre, truly from the olden days and fantastic acoustics due to its very high ceiling. Adelaide Symphony Orchestra played along with a variety show including Jimmy Barnes, David Campbell (his son), William Barton (didgeridoo player), Olivia Newton-John and Simon Burke was the MC also the Qantas Choir, and others. It was fun and great music. saw a few VIPs; John Olsen (former SA premier, now Aust Consul-General), Julie Bishop and Richard Butler (still hasn't found what he's looking for!). Next time anyone comes to visit it would be worth finding out if something is on at Carnegie hall - its worth a visit for the venue alone. we sat in an opera box up on the 2nd tier.
There are a few other Australia week events that we'll try to go to. Would've liked like to hear Tim Flannery, who's speaking at a fund raiser tomorrow night, but it's $US 1000 a ticket. Also will be passing on the gala ball at Waldorf Astoria on friday night ($US 325/ticket), unfortunately.

Posted by monica/paul at 9:17 PM No comments: 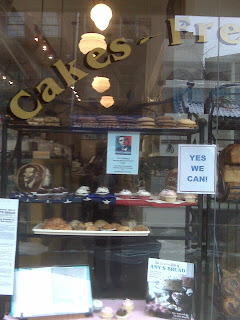 We were watching the inauguration on the computer at home via CNN but just as Obama got up to give his address, the screen froze, so we made a dash to the pub across the road and watched on big TVs there.  Amazing, what a guy! What a great speech. Commentators are talking here about a new national and global moment.
The photo was taken yesterday on my Blackberry at a cake shop in Greenwich Village - i buy cheese at the cheese shop next door. sorry for all the reflection off the glass. If you blow it up, you can make out Obama's face on the loaf of bread on the left, and the one on right obscured by the Yes We Can sign has "Change" on it. the patriotic cupcakes in between are red, white & blue, are for Inauguration Parties.
Posted by monica/paul at 1:00 PM 6 comments: 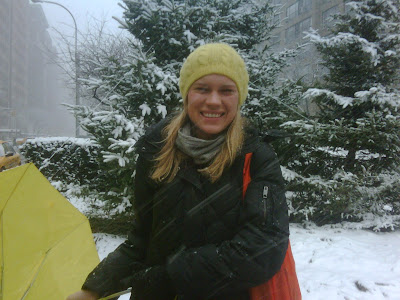 Of course it was wonderful having Katie here in December. On the last day [Dec 19th], we got the first and biggest snow storm to date, with 3-6" accumulation. It was fun at the time but it severely stuffed up her flight home: 5 hrs on the tarmac at JFK! 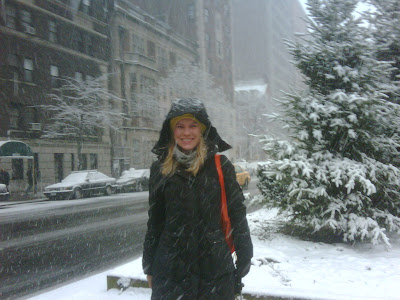 jogging in the snow 2 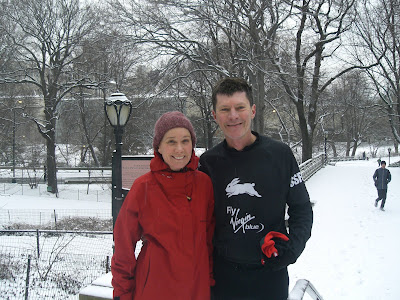 Here's another nice picture from this morning's run (that's the Metropolitan Museum of Art in the background). The next smaller one is from the same spot but looking across the bridge. 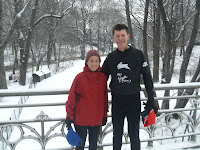 Jogging in the snow 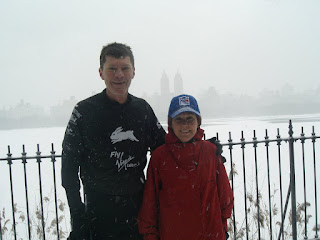 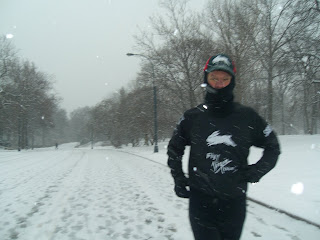 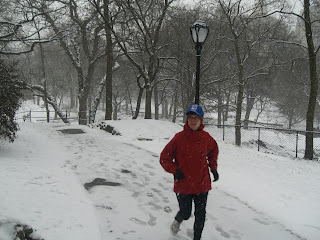 this morning it wasn't so cold - only minus 4 C, and no windchill - but it was snowing quite heavily. There was more than an inch (30mm) of snow on the ground. it makes jogging difficult because the road is slippery and also needed to wear a cap to keep the snow out of your eyes. we did our usual sunday run, over to Central Park and up to the Reservoir, do a lap of the reservoir (2.5 k loop) and back home, roughly 10 km round trip. You normally get a spectacular view of the Manhattan skyline when you are going round the northern side of the Reservoir; this morning it was foggy and also the reservoir was frozen over and covered in a layer of snow which was very pretty (top picture).
Obama's Inauguration on tuesday is the big news item here. If you did not see the 60 Minutes story on him, you should: it's very inspiring. You can still watch the video online. The link is http://www.cbsnews.com/video/watch/?id=4688747n. if the link doesn't work, go to www.cbsnews.com/video/60minutes, the date is Dec 28th 2008 and the story is called "the Long Shot Candidate"
PS sorry for the poor layout of this entry
Posted by monica/paul at 10:21 AM No comments:

tim and linda's visit in October 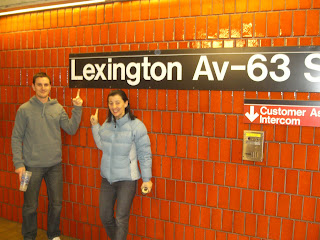 it was also great having tim & linda here in the autumn. by the way Tim, we got the $50 back after 2 letters to the MTA
Posted by monica/paul at 11:46 AM No comments: 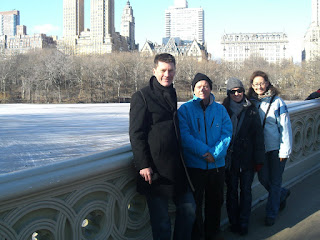 just practising uploading a photo. This was us on the famous Bow Bridge in Central Park 2 saturdays ago. you can see the lake is frozen. that's the Dakota Building in the background
Posted by monica/paul at 11:28 AM 3 comments:

Hi, this is the first attempt at a blog. This morning it was sunny but bitterly cold, -14 deg C, -20C with the windchill. we tried running but only lasted out there for about 20 minutes
Posted by monica/paul at 11:26 AM 5 comments: